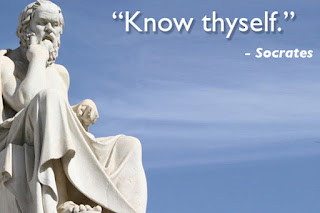 I ran across Dr. Glenn Rogers on LinkedIn as I was looking to reconnect with a cousin of mine. I don't know much about Rogers except that he taught philosophy at the university level. Once in a while, he'll offer an ebook in a free giveaway and so that's how I came to get a copy of Important Stuff Socrates Thought (The Important Stuff Philosophical Series Book 1).

The book is not terribly long -- it took me about two and half days to get through it reading at an on-and-off pace. It is written in an easy-to-understand style with a simple layout. As the title suggests, it is about the Greek philosopher, Socrates, or rather, what Socrates had on his mind, as well as his method of discourse which was mostly made up of a strategy of questions designed to influence inductive reasoning into discovering the truth of the matter.

What matter, you might ask? Well, the matter of anything (or everything), but suffice to say mainly the big questions. Like, who or what are we? Why are we here? What's the world all about? How are we to proceed?

Rogers reminds us that Socrates was among the world's most important thinkers when it came to those kinds of questions and it was his direct influence that led to conclusions by his understudies, i.e., Plato and Aristotle. Now, I was a philosophy student in college and so I am familiar with Socrates and many of the earlier Greek philosophers but I can say Rogers' book was a great refresher for me and has renewed my interest in classical philosophy and what I consider the roots of logic, reason, and even the cornerstones of civilization. The truth is, you just can't understand western civilization without studying a little Socrates.

If you do not know much about Greek philosophy (or philosophy in general), Important Stuff Socrates Thought is a great place to start. I enjoyed it so much, I plan to follow up by reading the next book in Dr. Rogers' series.
Posted by TommyBoy at 1:59 PM