She's Been Working Out 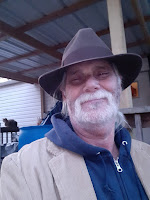 Today is the big day. I got up early, combed what's left of my hair, dressed up like a gentrified landowner, tossed some Halston on the back of my neck, put Mae in the truck, and drove to the polling place. I couldn't find my voter's registration so when they asked for ID I gave them my medical marijuana card. Don't judge me. She said it wouldn't do and so I handed her my press card. She shook her head again and I laughed and dug a Mekong Delta brown water sailor military challenge coin from my pocket. She didn't know what it was so I told her it was all I needed to get a drink or a free meal in the southern portion of these United States.

"Well, you need a driver's license or an approved ID to vote."

I gave her my VA ID which fingered me as a disabled vet as well as my driver's license.

"Thank you for your service," she said automatically.

"And thank you for yours," I responded.

So I was allowed to vote. I didn't have to wait in a long line and I voted straight ticket.

I expect all kinds of problems from the Left. Cheating, duplicate votes, dead people voting, and so on. Enough Democrats have commented that they will do whatever it takes to remove Trump from office. I believe them. To me, that means they're willing to cheat and break the law in order to win the election and get rid of their nemesis, the Trumpster. Isn't that what they've admitted on multiple occasions?

We should expect court cases that will attempt to invalidate the election results. There will be stories from the Left that will claim the election is a sham. NPR will express outrage for the next four years and Hillary will blame it all on Russian collusion. Pelosi will bring impeachment charges... again.

"We can't allow a man who pays hookers to pee on him to sit in the oval office," says Hillary, or something like that. Anyhoosit, Hillary should be the last person to make accusations. Why are we still hearing sound bites from her anyway? I hear she's contemplating the release of a nude Christmas calender. She's been working out and she wants to turn things around. Heh-heh.
Posted by TommyBoy at 12:57 PM