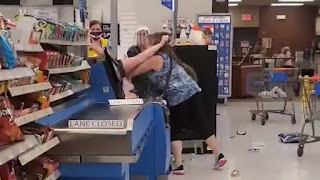 Yesterday was my planned trip to Walmart. It's not that I hate Walmart, I just don't like the long drive to the store and you know what? I'd rather go to a private, individual grocery store -- like it used to be. Walmart is too big. Too impersonal. But everyone uses Walmart now, unless you're a Hollywood star or a politician.

So, I really shelled out some money to get a few things I felt compelled to purchase. I bought a new office chair and put it together last night. It is way more comfy than my old office chair. If you come visit me, you'll probably sit in my old office chair. You can roll around the living room, if you want to. I bought a monitor (32 inch) for when my computer TV suddenly and tragically decides to quit working. A $108 for the monitor (it ain't a Sony).

I bought a thermometer that works. You just press it up against your temple and voila!

I got some lighter fluid for my three lighter Zippo lighter collection. I am a failure as a collector, that's why I only have three.

I bought a kitchen scale in case I ever decide to be a drug dealer and I bought a small vacuum sealer, another accoutrement of the drug dealer.

I got some other stuff too.

There were only three lines open at Walmart. The guy behind me said they were training us to use the self-checkout by not providing enough cashiers. Maybe so. The lady in front of me looked to be in her sixties and mumbled her complaints behind her pandemic mask. I had forgotten mine and was walking around without one, pissing off the snowflakes. I think it probably pissed off the lady in front of me.

So there we were, standing in line at Walmart like refugees exchanging one-liners and waiting our turn. As usual, I tried to make small talk when I should have kept my mouth shut. I told the lady in front of me that I was pretty upset about what was going on with the election. Her friendly expression turned dark. "It's a terrible thing," I continued, "we're losing any semblance of order if, you know, elections can be stolen."

"I hear poll workers are being threatened."

"They need to be threatened if they were in on it."

"What? They need to be threatened?"

"They've committed felonies, ma'am and changed the election results. We don't live in a banana republic."

"You're brainwashed," she blurted out. "Where do you get your news?"

"You're brainwashed," she repeated, receiving her change and walking away, making a show of wagging her head like a hoary old goat. To seal her position, she told me she'd pray for me that I might see the truth. Holy incoherent ramblings from yet another white American female -- quite possibly the craziest group of people on the planet!

I suppose she thinks she won the debate by calling me brainwashed and turning her back. I looked at the guy behind me and he shook his head. "They won't listen," he said.

In my mind's eye, I saw myself running up behind her and jumping up on her back and wrapping my arms around her throat until she fell over at which time I began to wail on her stunted cranium. I'd have killed her if the cashier had not asked me if there was going to be anything else.