Excerpt from The Cane Patch Collectors 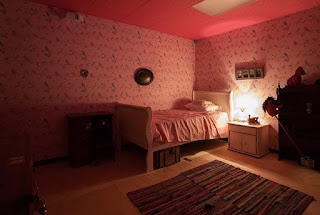 Excerpt from The Cane Patch Collectors by Thomas Stone
Something woke me up and I opened my eyes. My reading lamp was on and, thinking mom must have come in, I listened for the sounds of her moving around downstairs, yet there was nothing. The house was still and quiet. When the summer heat finally abated, we turned off the air-conditioners for good two weeks ago and the constant drone we had grown accustomed to was absent.

I checked the time and saw it was close to nine-thirty and determined I had been lying there for thirty or forty minutes. Sitting up, I listened again and heard something, a creaking floor or a shuffling paw. Yawning, I wondered what was keeping mom.

Then, a louder noise came from downstairs and I froze in place. What was it? I started across the floor and the floorboards creaked beneath my feet. I stopped and turned an ear to the opening where the trap door was in its open position with the ladder extended to the floor below. "Mom?"

Getting no response, I took a deep breath and started down the stairs, taking it slowly a step at a time. Announcing my descent, the stairs creaked and moaned. The house was dark with the only light coming from a lamp I had left on in the front room. The open door to mom's room was a darkened abyss; likewise, the partially open door to the bathroom revealed nothing.

Walking silently on the balls of my feet, I moved to where the hall met the front room and I peeped around the corner. Everything appeared as I had left it except that the kittens had moved and were nowhere to be seen. The kitchen window was partially open but there was a screen over the opening. I had left it like that. I looked for lurkers among the shadows and underneath the card table. I considered looking behind the couch but it was pushed against the wall and there was no room at all behind it. The house was as still as a church on a Monday evening.

I tip-toed across the front room to the window and peeped out. Across the street, old man Carver's place stood as dark and as quiet as a mortuary. I looked up and down the road and saw nothing; no lights from either cars, people, or houses for nearly a quarter of a mile. That's when I noticed that the porch light on my own porch was off. Had I not turned it on earlier? I considered it and, for the life of me, I just could not remember. Had I turned it on? I had meant to in case of the off-hand chance I did have trick-or-treaters come by or maybe Smolke or Charles or both would finish their candy begging in Bowie early and drop by to say hello and share a caramel nugget or two. Also, so mom would not have to walk up a darkened and broken sidewalk when she came home. Maybe the bulb had burned out. I tried the switch and the light flicked on.

I crossed the room to the kitchen and took a glass from the cabinet, held it under the faucet and filled the glass halfway with water before taking a drink. In mid-swallow, I heard a thump from mom's room. I stopped and listened but there was nothing else. It had to be the kittens playing, I told myself. I glanced about the front room, verifying the kittens were missing. I placed the glass in the sink and padded across the front room again, stopping at the hallway. I waited for a moment, my back against the wall, listening before I slowly and carefully peeked around the corner. Another bump arose from mom's darkened room and I nearly jumped out of my skin.

Across the hallway from where I stood was the bathroom. The door was in the same position as before, partially open and undisturbed. All quiet in that direction.

To my right at the end of the hall in darkness was the door to the garage. I didn't even give it a glance as I stepped inside the hallway and took the two steps to the pull-down ladder before pausing. I kept my eyes on the darkened open door of mom's bedroom keeping the ladder between me and it just in case a monster suddenly emerged. In my mind, my escape route would be the front door -- if anything came at me, I would run for the front door; do not pause, do not pass go, just run.

There was not a light in the hallway and, cursing whoever built that old house, I lamented the fact. The closest light switch was in mom's room and I was a mere two steps away. I could have turned about and gone to the bathroom where I could have switched on that light but it was behind me and besides, I did not want to turn my back on the potential creature in mom's bedroom. Why, even at that moment, it could have been watching my every move just waiting for an opportunity to pounce.

I wished I had a club of some kind, maybe a stick or the Little League Louisville Slugger I kept upstairs under my bed. I thought about returning to the kitchen for a knife or unplugging the toaster to use as a weapon but I encountered the same conclusion -- I would have to turn my back on the unknown in order to prepare myself, and then it might be too late.

My goal was the light switch and I inched forward. When I got close I leaned against the door casing and listened. All was quiet. Moving with caution, I snaked my hand around the door casing and felt along the wall until I found the switch. I held my breath and switched it on. The room filled with light from the overhead fixture and I quickly scanned the room to find... nothing. Not even the kittens, as I had expected. The best news of all is that there wasn't a shape-shifting monster waiting in ambush. I checked under the bed and behind the door and in mom's tiny closet. Nothing waited for me in those spots. Like the window in the kitchen, the sash was partially open, but as I turned to exit the room, I noticed the screen was ajar, as if hastily pulled into place. I looked closer and reached out to touch it. When I did, it fell away, dropping to the ground outside.

For a long moment, I simply stared at it, wondering how it could have gotten loose. Could the kittens have done it? I looked around for them again. Where were they? And then I wondered what it was I had heard when I was in the kitchen?

They were definitely not in mom's room. I went to the entrance to mom's room and stared down the hallway again. Light spilled from mom's room, illuminating the shadows I had passed prior and I noticed that the garage door, which was in darkness before was now exposed and partially open with enough room for a kitten to slip through. Had I left the garage door open when I brought the kittens in?

Dad had always reminded me to pay attention to everything and I tried, but somehow, I still slipped up. Had I left the door unlocked and open?

The light switch was inside the door and I flicked it on. The light exposed the broad bare concrete floor with a big oil stain in the center as well as my bike undisturbed and held upright by its kickstand. There were boxes filled with knick-knacks and old blankets and clothes, but not much of anything else. Mom's Toyota, I knew, was parked in the driveway right outside the drawn garage door. There was another entry door to the garage, a regular door that we rarely used and so it was kept shut and locked. and that's the thing: it was standing open. Goosebumps marched up my spine and I suddenly shivered with the thought that someone had been in the house.