The Ballad of Bandee Lee 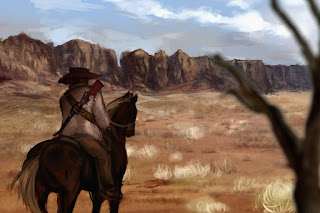 The Ballad of Bandee Lee
by
Thomas Stone

Bandee Lee was crazy, but like most crazy people, he didn't know it. Sometimes, he considered the possibility and always concluded that he wasn't. As a matter of course, out of everyone he knew, he believed himself to be the sanest of the entire lot. His belief didn't make things go any easier.

It was 1871. Three days prior, Bandee had departed the community of Hogwash, Arizona, just after midnight. Since then, he'd wandered on horseback in a southeastly direction but sometimes veered due south with the intention of riding all the way down to Mexico but then he'd think about Texas and start heading southeast again. Truth was, he didn't have much of a plan.

Lelonie Lou was the reason Bandee didn't care about anything anymore. She'd taken his heart but dashed his hopes by attending to another man. Yes, sure, she worked at the saloon hustling drinks from cowboys every Saturday night, but she wasn't a whoor Bandee reckoned. "What we had was special," Bandee murmurred to himself.

The rocky Arizona desert was devoid of water, shade, and anything friendly, yet Bandee could only see the inside of the bar-room back in Hogwash. He talked to himself and his ghosts as he rode along.

The first night, he slept in the saddle. The following two nights were spent on a blanket spread out under the stars, but even that awesome sight could not quell Bandee's anger. He considered returning to Hogwash in order to either kill the young cowboy or Lelonie or maybe the both of them. It was what they deserved.

And so Bandee picked his way through rugged territory with thoughts of restoring his vanquished honor. Maybe he’d go down to old Mexico to get drunk and find another woman, or maybe he’d return home to Texas.

Yet, his unrequited anger demanded sacrifice. He wanted to kill something, a rabbit maybe, or a coyote, but he was in Indian territory and didn't want to bring attention to himself. Was Bandee scared? He scoffed at the thought and spoke aloud, reassuring himself. "Why, they wouldn't have a chance against me. I am a deadly shot with my Colt sidearm and my Winchester rifle keeps my enemies at a distance."

Putting his nose in the air, Bandee brought his horse to a sudden halt. A taint of smoke rode the waves -- something was cooking nearby. He pulled the long rifle from its scabbard and tapped the flanks of the mare. She started up and moved slowly down a game trail for two hundred yards through mesquite and juniper bushes until finally passing around a rocky outcropping. On the opposite side Bandee discovered a man sitting on the ground in front of a small fire. A skinned hare sizzled on a stick over the heat.

When the man saw Bandee, he reached for a pistol wedged in a holster looped around the horn of his saddle which lay on the ground behind him. Bandee lifted the rifle. “Freeze,” said Bandee. The stranger didn't move a muscle as Bandee stepped down from the horse.

"Don't shoot me," the man said. "It took me all afternoon to hunt down this rabbit and I am more than willing to share."

Bandee stepped around the campfire. "Are you alone? Where's your horse?"

"He stepped into a gopher hole. Snapped his leg and I put him down."

"Why ain't you eating him?"

The man shook his head and turned his face toward Bandee. "I couldn't eat Brewster. Been with him too long."

"Don't make me no never mind about eating animals if I'm hungry enough," said Bandee as he pointed at the fire. "You need to turn the hare," he added, "or it'll burn."

The man relaxed and rotated the stake with the hare. "Are you going to shoot me?"

Keeping the rifle trained on the stranger, Bandee told him to "Toss that pistola over here, pard." The man complied and Bandee stuck it in his belt.

"Your back-up too. Do not say you do not have one. My guess is you have several. Now, hand ‘em over. Do it now or I will be forced to eat this hare alone."

The man started to reach towards his right boot and Bandee reminded him to take it easy. Using thumb and forefinger, the man pulled out a concealed .38 revolver and tossed it over.

"Well, it better be. I'd hate to have to kill somebody I did not know."

The man held up his hands, palms out. "No need to talk about killing and such. My name is Matthew Andrew Dwayne. I come all the way from Denver taking sales orders for my company. I got this here rabbit and you can have as much as you want. I ain't got no money to speak of but I got this saddle. I do not know if I can carry it and walk as far as I need to go."

Bandee stepped to the fire and smelled the cooking meat. "So, where you headed?"

"My next stop is in Languish. Do you know of it?"

"Been there once or twice."

"Could you please redirect the barrel of your rifle, sir?"

"What? Oh, well, I suppose I could relax a little now that we're old friends and all. Just be sure you don't decide to go froggy on me."

"I assure you, sir, I am not a pistolero nor some scofflaw lying in wait."

He flinched. "Disposable razor blades," he answered. "Along with holders, of course."

"You never have to sharpen your razor again. You simply replace the blade with an inexpensive, lightweight, thin strip of tempered steel. Our blades are quaranteed to give you a barber-smooth shave, every time!"

"Well, I've never heard of such a thing. Why don't I just sharpen the blade when it goes dull and use it again?"

He laughed. "You can't. It's too thin to re-work." Matthew Andrew reached into a pocket and Bandee redrew his Colt.

"I was only reaching for my business card."

"By all means." The man pulled out the card and handed it over. "Can you read?"

"Of course I can read. This here says you work for the Gillette Safety Razor Company in Boston."

"With new offices in Chicago and Denver."

"Never heard of it." Bandee returned the card and the other man shrugged before suggesting they remove the bunny from the fire and eat it. "I think it's done," he added.

The two men sat on opposite sides of the little fire -- little more than a handful of coals by that time -- and ate the rabbit. Afterwards, Andrew suggested they have a drink and he removed a bottle from a saddlebag.

"That's right neighborly," said Bandee as he allowed his new friend to pour two fingers into Bandee's battered tin cup. Bandee re-holstered his gun and the two men toasted the stars, which had begun to blink on during dinner.

Andy said it was a good thing Bandee had come along when he did and chose that moment to ask for a ride to the nearest town. Bandee narrowed his eyes. "I ain't ready to return to Hogwash."

"Hogwash? I passed through there three days ago."

"Yep. Got me a bath, a haircut, and a good night's sleep. I got lucky in the saloon, if you know what I mean, and a little exercise always makes me sleep better. Being in a real bed for a night don't hurt none, neither."

Bandee stared at Andy. "You went to the saloon?"

"Where else would a pilgrim go in that tiny spot?"

"Did you meet anybody there?"

"If you are asking if I sold any disposable blades, the answer is no."

"No, no, that's not what I meant. what I meant was did you meet any of the working girls?" Bandee raised an eyebrow.

Andy gave a conspiratorial wink. "Pickings were pretty slim but I did finally palaver with a sweet thing and we came to a mutual agreement."

"I got to talk about Gillette and she had to listen. Only cost me two dollars altogether. And that includes the drinks."

Bandee leaned forward. Enough light was given off by the dying embers to illuminate his face with a ghostly red pallor. "I think I know every girl that works up there. Tell me, Andy, do you remember her name?

Andy grimaced. "Actually, I go by 'Matt'. I'd prefer to be called Matt. Andrew was my mother's maiden name."

"That's too bad. I sorta liked calling you Andy. Like Old Hickory Andy Jackson or Andy the Panda from the comics?"

"I prefer to be called Matt."

"Well, I'd like to be called the King of Arizona."

"I am not going to call you that." Matt or Andy shook his head.

"Because it's absurd, that's why. There is no King of Arizona."

Bandee and Matt/Andy looked at one another. Seconds of silence passed before Bandee again asked, "What was her name?"

Mr. Dwayne inhaled before answering. "She said her name was... Leloni something or other."

Bandee's gun skills were superb and his right hand moved in a blur pulling the Colt revolver from its holster too fast for the eye to follow. Thunder cracked from the gun barrel and Andy's head snapped backward as the .45 slug hit the razor salesman in the center of his forehead. Poor old Mr. Dwayne never knew what hit him.

Bandee let the body lay where it fell, went to his horse and climbed aboard, then rode out into the night.